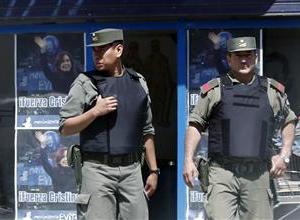 Sociologist Gabriel Kessler has been studying crime for more a decade. As a Conicet researcher and teacher at the University of La Plata, his published works include Sociología del delito amateur — a take on marginal youth who had committed crimes — and El sentimiento de inseguridad (The feeling of insecurity).
Regarding the social conflict that followed police strikes, Kessler told the Herald that Córdoba Governor José Manuel De la Sota “set a very high bar for other provincial governments,” something that may mark the beginning “of a struggle over wealth distribution.”

What do you think caused the current police crisis?
Scenarios are different according to the province, but protests reveal a discontent over wages, especially among the lower ranks of the force. If you hear what some spokesmen — or wives of police officers — are saying, you’d notice they blame the highest echelons. There’s a gap between them. Now some things have caught my eye. For example, how couldn’t the smallest provinces such Chaco, Corrientes and Catamarca — where the government is usually more aware of certain movements — see it coming? Then there’s this idea that if the police is not present (in a certain area), people loot. A latent social conflict actually exists in certain sectors, but that’s not the whole story.

Would you agree that hegemony — social peace without the use of state violence — is working in certain districts and not in others?
You need to see where and how opportunities arise — who told who that there was going to be a liberated area, thus becoming a hotspot for violence.

Do you think the decision of Córdoba Governor Juan Manuel De la Sota to raise police wages to 13,000 pesos ended up causing a domino effect to the rest of the districts?
Without a doubt. De la Sota played a very complicated game because he set a very high bar for other provincial governments. Teachers unions have already warned about future demands. Anyone who had been asking for a 30 percent wage hike now feels like an idiot. We’re seeing the beginning of a struggle over wealth distribution.

When did these attempts of letting police regulate itself begin?
By around the same time as when they were allowed to have their own sources of “financing” (through illegal activities), it’s what we call the double pact. This has existed throughout these 30 years of democracy — but also during the (1976-1983) dictatorship. And although there were some attempts by (former Security Minister León) Arslanian and others in the Santa Fe province, democratic governments never achieved a major reform, it’s one of the greatest political debts of this era.

In Buenos Aires province, half-implemented reforms were rolled back by the current administration.
The (Governor Daniel) Scioli administration decided to return to the police leadership of security forces. There was also a setback in the progress over police training. The situation is somehow different at the national level, but one must treat each district as a unique case. On the other hand, the security agenda was fully installed in the provinces. This is not to justify governors, but one needs to acknowledge that brave reforms — which can sometimes bring complicated results — are hard to push through when at the same time you have a strong demand for public safety.

The paradox being that if you reform security forces, suspended police officers may try to destabilize peace — but if you leave things the way they are, social peace can be lost anyway.
Absolutely. Now the police has a huge power and an almost extortion-like negotiation capacity. Now the next thing that comes to mind is — what will happen when the Border Guard fails to keep up with all these demands? Border Guards are now believed to be the security force that is able to replace everyone, at any time.

Can we compare these events with those of December 2001?
No. I mean, there are some conflicts and images that take us back to those times — but I don’t think this is the same situation.