Improvements achieved — but security forces need to be controlled by civilians 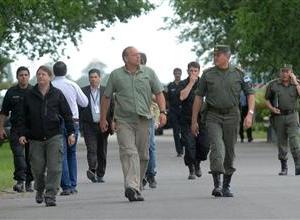 Major improvements regarding citizen security have been achieved since the return of democracy, although inconsistent approaches to criminal activity — which has become more complex over the last 30 years — and the lack of structural police reforms are challenges that have yet to be fully tackled.
“When it comes to security, changes have not been complete,” former security minister León Arslanian told the Herald.
“I welcomed the creation of the Security Ministry and the fact that the government began taking some action in the right direction with the appointment of (Nilda) Garré — but I still see little progress on this front.”
Arslanian said the most remarkable absence of the last three decades had to do with the failure to restructure police in order to establish the democratic governance of the force, led by civilians — an attempt he reportedly tried to implement during his time at office.
But the history of the government’s stance towards crime has changed from a zero-tolerance, tough-on-crime narrative to a progressive approach consistent with human rights.
The results leave much to be desired as evidenced by the sit-ins and protests that have led to police strikes in several provinces over the past week.

Acceptable in the ‘80s
“In the years following 1983, security matters were not at the top of the agenda as other issues were being widely discussed, such as the trial of the military juntas — the downward spiral of crime had not yet become fully evident,” former Buenos Aires province lawmaker Walter Martello told the Herald.
The 1987 Ingeniero Budge massacre — when three youngsters were killed by police — and the murder of 17-year-old Walter Bulacio in 1991 were two cases of police brutality that had a great impact on public opinion.
After those events Argentines “began questioning the repressive apparatus and the lack of individual guarantees,” wrote sociologist Gabriel Kessler and historian Sandra Gayol.
Measures by human rights movements following these cases marked the end of edictos (city ordinances), local measures not included in the penal code that granted arbitrary power to police officers.

Comings and goings
Martello — who is about to release a book on the Buenos Aires province security ministers of the last few decades — said that during the 1990s new powers were granted to the provincial police forces once again.
“The arrival of (former governor) Eduardo Duhalde marks the beginning of a series of comings and goings in the security arena. Everything was tried to renew the department — from the naming of (carapintadas Army mutineers head) Aldo Rico to the appointment of mayors such as (Ituzaingó local leader Alberto) Descalzo,” the former Civic Coalition (CC) congressman said.
Low salaries and the first experiments to “let the police regulate itself” were the dominant factors of the era.
The first real attempt to improve things, Martello said, took place during the 2002-2003 administration of Juan Pablo Cafiero, when Felipe Solá began as governor following the 2001 political and economic crisis.
“Cafiero took office at a very difficult time, with a wave of kidnappings for ransom and car theft murders. He pursued a very serious policy regarding car thefts — but enjoyed little political support and his measures didn’t last too long.”
Following a series of moves by Solá’s successor, Daniel Scioli, the recent appointment of Ezeiza Mayor Alejandro Granados marked the return of the tough-on-crime stance that has repeatedly failed in the past.

Ties with illegal activities
Other provincial forces, however, are even further behind, Arslanian warned.
“In many districts there have been no major changes since the return of democracy. And it’s a shame because attempts at restructuring — mainly with regards to leadership of the security forces — could be promoted from the national administration. This posture of police ‘autonomy’ must end,” the former official said.
The recent examples of the Córdoba and Santa Fe provinces, where police chiefs were arrested accused of ties to drug-trafficking, proves that the link between security forces and illegal activities is still alive and well.
At a national level, Kirchnerite governments have tried to reform police forces, with different emphasis over the years.
The naming of centre-left leader Nilda Garré as Security minister marked the height of this trend. But her resignation earlier this year and the rise to power of Lieutenant Colonel Sergio Berni — a shift not shared by progressive sectors — was a return to certain policies at odds with the multi-party “consensus for Democratic Security” agreed upon in 2009.

A neglected issue
Ever since the restoration of democracy, political leaders of this country have neglected public safety issues, former Buenos Aires province security secretary Marcelo Saín argued in a recent United Nations report.
These problems, Saín said, “became a politically relevant matter when the growing sense of insecurity among the population began to have an impact on public opinion and affected the electoral performance of national and provincial leaders.”
In this context, specialists agree that a real effort to modify the sector — improving police transparency and crime-fighting tactics — must be undertaken outside the electoral agenda.