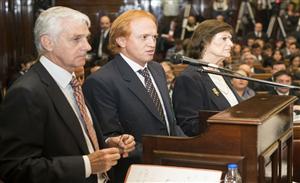 One of the main merits of the two-day public hearing over the constitutionality of the Broadcast Media Law at the Supreme Court was that it forced the sides to take their arguments out of judicial circles and into the public eye.

The hearing ended up exposing a couple of weaknesses in the government’s case — particularly when asked to report their progress on the long-promised “new voices” that this new law would usher in — but it also exposed a flawed premise at the core of the Clarín Group’s claim.

Clarín representatives repeatedly affirmed their dominant position over the market by saying it was the way to guarantee their “political independence.”

“This sustainability scheme is the only one possible in order to gain independence from government advertising,” attorney Alejandro Carrió argued.

He was referring to the more than 270 radio, television and cable licences that, according to the AFSCA media watchdog, the conglomerate currently holds. This de facto situation not only violates the disputed Broadcast Media Law, but also the previous one, which — even after a series of pro-conglomerate modifications during the 1990s — stated that no single economic group can hold more than 24 broadcasting licences.

Venezuelan lawyer Asdrúbal Aguiar Aranguren, who, representing the Ibero-American Observatory for Democracy, recognized the state has the right to “regulate the radioelectric spectrum” (something that was subject to heated debate back in 2009 but apparently is no longer a matter of controversy) but “within certain limits.”

“The state cannot impede the growth, the development or the economic viability of media,” Aguiar Aranguren said.

This “growth” included the merger of Cablevisión and Multicanal between the country’s two main cable TV companies which came into effect almost six years ago. Apart from one dozen TV and radio stations, Clarín now owns 237 cable licences — 58 percent of the market share, according to AFSCA.

“If Clarín had stayed with the previous business model, it would not have been able to survive in the converging market” that links broadcast, cable television and the Internet, argued corporate lawyer Damián Cassino.

Clarín attorney Lucas Grossman was more explicit when he talked about the need to have “broad shoulders” to be able to report on news that could compromise the national government’s interests.

“Size does matter,” he said on Wednesday.

This line of thought peaked when lawyer María Angélica Gelli took time in her closing statements to warn that if the Broadcast Media Law was deemed constitutional, “the critic (journalistic) approach will disappear,” because — wait for it — the Clarín Group “is the only media outlet capable of doing investigative journalism” in Argentina.

What’s freedom got to do with it?

The Supreme Court challenged this world view through some of the questions aimed at the media giant’s defendants at the beginning of yesterday’s hearing.

“If freedom of expression requires an economic volume such as the one displayed by the Clarín Group, what happens with other groups that are not as large? Aren’t they able to express themselves freely?” the justices asked.

In other words, it could be argued that some scale is necessary to enjoy independence from both the state and the market — but 270 licences?

Carlos Winograd, an economic expert for the media group, gave a stammered answer before Chief Justice Ricardo Lorenzetti interrupted him.

“We want you to add something new to the question,” the justice warned.

A similar situation was seen minutes before — regarding the very first question the tribunal asked the group’s representatives: “Why do you say (the Broadcast Media Law) affects freedom of expression?”

The question was met with a deafening silence. Four different lawyers came to the microphone and tried to explain, one at a time, that the law “created an effect that was contrary to its purpose.”

Lorenzetti rolled his eyes and called on the hearing to continue.

It was a basic question.

Last year, while limiting the extension of Clarín’s injunction, the top tribunal said that until that moment of the judicial battle there had been “no arguments that directly related the divestment article to (the issue of) freedom of expression.”

Measured by the answers heard, this argument — the heart of Clarín’s strategy: to prove that this does not just affect their assets but that “freedom” is also at stake — still does not appear to convince the country’s highest court.