Thefts on the rise, but homicide figures can still be compared to those of 2009, says official report 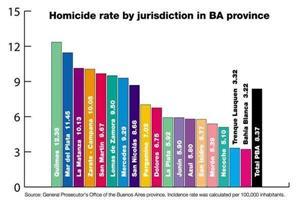 Three weeks after Governor Daniel Scioli declared the state of security emergency in Buenos Aires province, crime crashed back into the news following a number of violent robberies and a report saying that during 2013 murders in the district were up by 8.28 percent compared to a year before.

Crime in BA province has been somehow steady through the years, as last year’s 1,295 homicides were fairly similar to the 1,348 killings that took place in 2009, available figures from the provincial Prosecutor’s Office revealed.

However, lawyer Gustavo Arballo concluded this week that this means Buenos Aires province has a murder rate of 8.4 per 100,000 inhabitants — a figure 52 percent higher than the national average.

Numbers are not steady throughout the province: the province judicial districts of Zárate-Campana, the Greater Buenos Aires areas of Quilmes and La Matanza and the coastal city of Mar del Plata are “hot spots,” with homicide rates of over 10 per 100,000 people.

On the other hand, the judicial districts of Morón (that includes the western districts of Morón, Hurlingham, Ituzaingó and Merlo) and San Isidro (comprising the San Fernando, San Isidro, Pilar, Tigre and Vicente López municipalities) show better results.

Things are not that clear when it comes to measuring robberies: information from the local Prosecutor’s Office (which is subsumed to the Buenos Aires province Supreme Court) is based on Preliminary Criminal Investigations (IPP) — that is, actual reports made by the victims.

During 2013 a total 723,138 IPPs were recorded in the district, with only a fraction being robberies. Statistics also include kidnappings, scams, injuries and other damages.

But many people do not report these events due to their mistrust of the police and the judicial system, Walter Martello, the head of the Civic Coalition (CC) in Buenos Aires province, told the Herald.

According to Martello, only one in four criminal complaints were followed up with an official response — meaning that most cases lead nowhere but to dead ends.

Separating the wheat from the chaff

So what do available statistics reveal about this problem?

— The first is that even though homicides and robberies rose from 2012, last year’s results ended a downward trend in crime rates in the province that had begun in 2010, at least according to official figures.

— The second is that crimes involving underage offenders continue to represent a very small percentage of total crime, dismissing claims by centre-right lawmakers — even within the ruling Victory Front (FpV) — who during last year’s electoral campaign insisted on using this argument to lower the age of criminal responsibility, currently at 16 years.

Less than 14 percent of all murders committed in the province during 2013 were perpetrated by minors, the report published earlier this month said.

In this context, local political leaders called for a comprehensive approach to fighting crime that goes beyond the anti-crime policy package Scioli had signed by decree earlier this month.

“It has become evident that more cameras, more bulletproof vests and more police forces are not enough,” Martello said.

Victory Front (FpV) lawmaker Guido Lorenzino, head of the Security Committee in the BA province legislature, did not deny the phenomenon but told the Herald statistics proved their stance on gun control, which included a much-criticized bill by the Scioli administration aimed at restricting the release of potential criminals found with a firearm who tried to elude police.

However, Arballo said current figures are unable to prove whether the bill — which was finally passed into law in June last year — has had any effect at all. Experts and opposition leaders claim the province does not provide enough information to help with comprehensive efforts against violence.