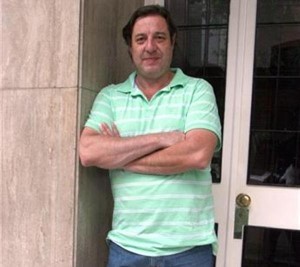 Last month, the Broadcast Media Law turned five. It was a bittersweet celebration, marked by the decision to move forward with the forced divestment of the Clarín Group and the approval of the adjustment plan filed by Spanish media giant Telefónica.

With the Clarín case stalled in the courts, the extent of the changes produced by the regulation passed in 2009 are up for debate once again. Communications expert Guillermo Mastrini welcomed the Herald at his home in the City neighbourhood of Colegiales to discuss how the Media Law has affected the lives of Argentines and whether a new government could get rid of the measure’s anti-trust mandates.

It’s been more than five years since the Media Law was approved. What has changed since?
The law is a major step forward and we should not spurn it. New rights have been granted. A law, however, does not define policy — it’s just the legal framework that you can use to build a communications policy. In that strict sense, the law is valid and has busted the myth that it was impossible to impose new regulations without following the dictates of big media groups. It could be argued, though, that the government went from considering only the interests of big corporations to not taking them into account at all. But the experience has been quite an example for Uruguay, which finally approved its own broadcast media law.

What were the shortcomings of this experience?
Evidently, we’re not dealing with a law that went after the interests of (Spanish conglomerate) Telefónica nor of some US companies. But that’s part of a more specific analysis.

Would you say the spirit of the law has been violated?
For the law to be fully implemented we need policies that are consistent with the law. But that did not take place. The democratic will to improve communications in the country set out by the Broadcast Media Law has not found its expression in the communications policy carried out by the national government once the law was approved. Then there are more minor things.

Such as…?
We’re slowly seeing more (audiovisual) productions from the provinces. It’s a long process because it involves training workers, generating an audience… But I still believe the AFSCA media watchdog could have done more for that. I’m also opposed to the idea of reducing the communication policy to a mere competition with the Clarín Group, which has led us nowhere. This is a key weakness. This failed policy ends up undermining the law itself because the government is not able to show any results. And it seemingly allows future governments to say: “Why should I abide by the law if there was a discretionary implementation of regulation by the same government that approved it?”

As for the very heart of the law — its anti-trust mandates — one can conclude that, five years on, only a few conglomerates were forced to sell some of their less important media outlets.
Yes, there were no significant changes on this issue. Some purchases did take place, but mostly by businessmen close to the government. Meanwhile, we have not witnessed major changes in the audiences, who have remained loyal to traditional media.

Let’s briefly analyze the Telefónica case. If you were a director at AFSCA, would you have approved the plan the company filed in order to comply with the Media Law?
I believe its most flagrant violation is that it is at odds with the law’s mandates on foreign ownership. The Attorney General’s Office has been very clear on this point: the only bilateral foreign investment agreement regarding media outlets is the one that Argentina signed with the US. The other point of contention — the article that bans public service providers from holding a broadcast licence — was partly spared by the new Telecommunications Law. I mean, the law had not yet been passed when AFSCA approved Telefónica’s plan, but it could be argued that at this point (AFSCA chief Martín) Sabbatella was following the spirit of the new regulation. But foreign ownership was clearly a problem and it’s a shame that the government approved Telefónica’s plan, because many people are using this case in order to say the law was plain bad. The letter of the law says media concentration is bad, but the message we’re getting here is that there are good monopolies and bad monopolies.

What about the new telecommunications regulation, the Digital Argentina bill, that was quickly passed into law last year?
The first conclusion I have come to is that it avoided the participation of the public. The idea that citizens should take part in public forums and debates — one of the cores of the Broadcast Media Law — was outright nixed by the government. There were a small number of sessions in the Senate and not a single hearing in the Lower House of Congress. There were no visible negotiations with other parties. In fact, there was no support from other political forces. But the main problem I see with Digital Argentina is that the regulatory decree ends up being more important than the law itself. And that’s a problem.

The regulatory decree is in the sole hands of the president, which provides some room for discretion…
That’s exactly why I say it’s a problem. No one was completely happy with the law — business leaders because new regulations do not benefit a particular set of companies (it provides benefits on one side and costs on the other) and cooperatives because they don’t feel they have been particularly benefited either. It can’t even be described as a Victory Front (FpV) bill, I would say it’s a bill sponsored by one sector of the government.

Some FpV senators had to deal with resistance from a few of the cooperatives operating in their home districts…
Well, you can see (the outcome of) that conflict if you read the amendments that were made to the law. All changes improved the original draft. But I don’t think it improved enough to say it’s a law that respects basic standards.

The administration will leave office in 10 months. What do you think will happen with the Media Law?
I don’t think the law can be so easily reshaped, especially because Congress will be divided after December. The Victory Front is likely to remain as the main congressional bloc, mostly thanks to its previous electoral performances. Any changes will need a broad consensus — and one thing is agreeing to disagree but agreeing to agree is quite another.

What about the forced divestment of Clarín? Will that train have left the station once the next president takes office?
In a scenario where there is less of a political will (to move forward with Clarín’s divestment), I believe the process will slow down or even be nixed altogether.