A few months ago, former president Cristina Fernández de Kirchner was odds-on to win the senatorial race in Buenos Aires province. Now, as a string of headlines deliver positive news for the Mauricio Macri administration and her legal woes mount up, her candidacy looks to be staggering toward the finish line. With just a week to go until voters go to the polls, can she deliver the victory needed to reignite her political career? 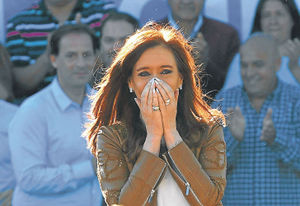 When it comes to elections, it is often said that Buenos Aires province is “the mother of all battles.” Maybe this time around those uttering such declarations are right. Not only is Argentina’s largest district home to almost 40 percent of the country’s voters, the August primaries in the senatorial race produced an exciting 34-to-34 percent practical tie between former president Cristina Fernández de Kirchner and President Mauricio Macri’s chosen candidate, Esteban Bullrich.

The controversy over who ‘won’ in BA province — technically, both Fernández de Kirchner and Bullrich were running unopposed, but the vote still pitted candidates against each other — marred the weeks after the so-called PASO primaries. Fernández de Kirchner, heading the Unidad Ciudadana (Citizens’ Unity) ticket, celebrated the results of the final vote count, which saw her win slimly by 34.27 percent against 34.06 percent for Bullrich, the candidate of the ruling Cambiemos (Let’s Change) coalition. But that doesn’t necessarily mean the former president has a good chance of emerging triumphant in the October 22 midterm vote.

“We used to have a golden rule in Argentine elections: that the candidate who wins the primaries also wins the election. But this is no longer the case,” pollster Analía del Franco told the Times. “The day of the primaries, it appeared as if the government had won the election: their candidates were celebrating their victory in several provinces, we saw constituency maps painted in yellow [the colour of Macri’s PRO party]… if Cambiemos can hold onto this difference in their favour, they will win the race for the Senate.”

The former president’s wafer-thin victory was a disappointment for her team; she had been predicted to win by at least a few percentage points. As a result, a narrative formed after the election that the results read more like a defeat than a victory.

Has the tide turned? Can Fernández de Kirchner win this crucial race this time around?

THE WALKING DEAD. Some compared the former president’s situation to that of Schrödinger’s cat: the results of the primaries showed that her political career is both alive and dead at the same time. Anti-Kirchnerites who wanted a disastrous outcome were surely disappointed by the results, but so were CFK’s supporters, who had hoped for a six-point difference that ended up narrowing down to just a handful of votes. The former president won the August elections, but ever since the beginning of campaigning it has seemed as though she has been coming from behind.

“In order to win, Fernández de Kirchner needs to focus on attracting ‘new’ voters and people with little money in their pockets — especially those who voted for (non-Kirchnerite Peronist contenders) Florencio Randazzo or Sergio Massa in the primaries,” politologist Nicolás Tereschuk told the Times.

Massa, the ex-president’s former Cabinet chief, broke away from the then-ruling Victory Front (FpV) in 2013 and has sold himself ever since as a third way between Kirchnerism and Macri. He obtained 15 percent of the vote in the PASO. Randazzo, another former Kirchnerite official (he served as CFK’s Interior and Transport minister until the very last day of her presidency in late 2015) failed to reach a deal with the former president, confronting her in the primaries and receiving a disappointing six percent while running on his own ticket.

“If you take a map of Buenos Aires province showing the breakdown of the results of the PASO, you would see that this is quite a challenge,” said Tereschuk. “Most people know support for Cambiemos is strong in high-income areas and weak in low-income areas. But Macri’s coalition somehow manages to ‘connect’ with the poor more than CFK with those better off.”

The attempts by the former head of state to attract those voters have taken on the form of a newfound openness. This week, the 64-year-old political leader headed a press conference (for the first in years), during which she criticised federal judge Claudio Bonadio’s decision to summon her to testify over her role in the alleged cover-up of the investigation into the 1994 bombing of the AMIA Jewish community centre. There, she also spoke about her electoral strategy.

“It’s quite clear that two out of three voters in Buenos Aires province are opposed to Cambiemos,” Fernández de Kirchner told a gathering of local and foreign reporters. “I stand by this definition and I will use this ‘card’ until October 22.”

However, most experts believe that those who voted for Massa and Randazzo last time out will not be easily wooed by the former president.

“Many Massa’s voters are angry at him. They believe he has over-promised and under-delivered and some are switching their vote — but to Cambiemos,” said del Franco, who conducted a province-wide poll two weeks ago and is preparing a new one to be released just prior to the election.

Randazzo, for his par t, doesn’t appear to be losing votes among his small, “loyal” electoral base. “Randazzo’s voters are neither anti-Peronists nor anti-Kirchnerites. They want to change Peronism from the inside out. I think he’ll keep most of his votes,” she added.

Political expert Santiago Rodríguez Rey, who holds a MA in Political Communication from University of São Paulo (USC), says that the former president is slowly acknowledging that “the fountains of votes to drink from are dry.” He added that while it is true that two-thirds of the electorate has failed to support the government’s austerity measures at the polls, the same proportion of citizens are not voting for her either.

A first reading of the results of the primaries appeared to indicate that some of Massa’s votes could go to Bullrich and that some of Randazzo’s voters could switch to CFK in a polarised scenario. Rodríguez Rey challenges this view. Many of the votes for the former Interior and Transport minister, he explained, are coming from the province’s interior “and Cristina’s campaign is mostly focused on Greater Buenos Aires.” dialogue of the deaf, so to speak.

A QUESTION OF STRATEGIES. This week’s press conference at Instituto Patria in downtown Buenos Aires was the last in a series of efforts by Fernández de Kirchner to show herself as a more “humane” candidate. The plan included some marketing moves, like the visual impact of her political rallies, aimed at showing that she’s closer to the people, something which drew comparisons to Macri’s depoliticised way of appearing before audiences. And of course, in recent weeks, the former president has shown a renewed passion for interviews with journalists who were repeatedly denied a one-on-one question and answer session with the political leader during the time she was president.

“In the primaries, Cristina’s campaign was tidy and focused, but now she’s taking risks and going off-script,” Tereschuk said. “But it should be noted too that the media and judicial attacks against Kirchnerism have also intensified.”

The political scientist and editor of the Artepolítica website noted that the presence of CFK’s Unidad Ciudadana is “under-represented” if one takes into account the fact that the party is set to receive at least 30 percent of all voting preferences. “At the same time, Randazzo, Massa and even the left appears to be over-represented in radio, TV and even outdoor advertising.”

The ruling party, in contrast, is not taking any chances.

“Cambiemos’ campaign ahead of the primaries was not so good. Back then, the government exhibited its candidate way too much and (former Education minister) Esteban Bullrich doesn’t seem to fare too well in campaigning,” said Tereschuk.

During the last part of the electoral cycle, the ruling coalition used its trump card. Buenos Aires province Governor María Eugenia Vidal stepped in, leading from the front and Bullrich was kept away from the limelight. “So the campaign seems to be going just fine” for Cambiemos, added Tereschuk.

For Rodríguez Rey, this move goes to show that Cambiemos’ campaign in the province works on several levels, from the traditional “timbreo” (doorbell-ringing walks) to the inauguration of public works.

“They have several candidates and non-candidates for different moments of the campaign. It is clear that for Cambiemos, ‘the candidate is political project’ [tactic is what] they have for the province and its centre is Vidal,” he argued.

This is a clear advantage for the ruling party, as the BA province governor — who defeated staunch Kirchnerite Aníbal Fernández in the 2015 elections — is widely regarded as the most popular active politician in the country.

Last week, a poll by the Poliarquía consultancy firm indicated that Bullrich was set to receive between 39 and 42 percent of the votes in the general election, against 36 to 38 percent of Fernández de Kirchner. This “vote projection” was calculated by including an estimation of what would undecided citizens do on October 22.

Does this mean that the former president should take more risks and multiply her public appearances ahead of the crucial vote? Del Franco has her doubts.

“Voters link her televised appearances to the much criticised national broadcasts that marked her administration,” said the pollster. “I believe the key has more to do with the territorial campaign and with her walking the province.”

This week, electoral strategists from both sides ruled out a televised debate between the two top candidates in the province. It’s a missed opportunity for the former president, who insisted on holding the debate at a national university and not in a TV studio owned by Clarín Group’s Todo Noticias news channel. Pollsters have repeatedly pointed out that Bullrich — who made a series of spectacular verbal gaffes during the campaign — had more to lose.

What’s at stake? First of all, the winner of the election will get two senatorial seats, while the runner-up wins the minority seat. Fernández de Kirchner is a shoe-in to win a seat, but there’s a more important meaning behind this election: the few votes separating first from second may mean the world for the former president’s political career, a politician who marked the last decade and a half of political life in Argentina, in the years to come.

We’re just days away from knowing.