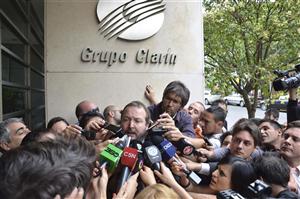 Today’s government-backed rally in Plaza de Mayo will be seen as a show of strength for Kirchnerism, but it can also be viewed as a new way of challenging media foe Grupo Clarín.

The conglomerate headed by CEO Héctor Magnetto has obtained some symbolic victories during the last months, including a certain degree of control over both the political agenda and the recent massive anti-government protests that took place in almost all urban centres.

But the relationship between the Kirchnerite governments and Clarín has changed sharply over the last decade.

It all began with a favour.

Former president Néstor Kirchner was politically weak after garnering just 22 percent of the popular vote in the 2003 election and early into his first term he passed into law a “cultural goods” bill that Eduardo Duhalde, his predecessor and then political godfather, had originally signed to benefit Clarín.

This change of the Bankruptcy Law prevented Clarín and other heavily-indebted media companies from being purchased by foreign investors. With this legal framework, the media giant gave favourable coverage to most of the government’s measures.

Two years later, and without any public debate, Kirchner signed an emergency decree that suspended limits on all of the country’s broadcasting licences for ten years.

Kirchner met with Magnetto at the Olivos presidential residence more than once. They lunched often. When Kirchner named his wife, the then-senator Cristina Fernández, to succeed him as President, the campaign spot for the Victory Front showed a “typical Argentine family” reading a newspaper that said that the economy was booming.

Soon after Cristina Kirchner was elected president, a long conflict broke out between her government and the farming sector over a tax increase for soybeans. Fernández de Kirchner’s administration accused Clarín (one of the main organizers of Expoagro, the country’s largest annual agricultural fair) of biased coverage.

That marked the beginning of an antagonistic relationship.

Many, especially those on the left, thought this fight was nothing but a theatre of shadows and that reconciliation was near.

But the Kirchners raised the stakes.

In 2009, after a defeat in the midterm elections, Fernández de Kirchner sent to Congress a draft for a new Media Law.

The bill was largely discussed by society, and finally it received support from the Victory Front and other non-Kirchnerite parties. The bill gained praise from special UN Rapporteur on Freedom of Opinion and Expression Frank La Rue and was finally approved by overwhelming majorities in both houses of Congress.

The debate over the Media Law, which replaced a Broadcasting Law passed during the times of the last military dictatorship, widened the gap between pro- and anti-government journalism in the country. Since then the press has been polarized.

The Media Law was in full force and effect for only a couple of days in 2009. Soon, an avalanche of injunctions won by Clarín and other media groups successfully blocked some of its key articles, including Article 161, which gave one year to licensees to adjust their situation to the requirements stipulated by the Media Law.

The “media war” reached its peak.

After several months of comings and goings, in May 2012 the national government interpreted that the Supreme Court had declared the injunction freezing proceedings would expire on December 7. The national government treated 7D as the “the mother of all battles” and tried to proceed ex officio even after Clarín was granted yet another injunction.

The day after the D-day

Some interest groups and social organizations that backed the Media Law since the very beginning were sorely disappointed, as three years and a half later the promises made by lawmakers in 2009 (new non-commercial stations, harsher restrictions on advertising, more diverse contents) are yet to materialize.

Last week, the president of the Federal Authority of Audiovisual Communication Services (AFSCA) Martín Sabbatella published a report in which he admitted his office showed some weaknesses in the enforcement of a screen quota system for national movies and admitted airwave conflicts in thirty major cities.

The head of the media watchdog also promised that the delayed results of the media census taken in 2010 will be available in August.

The thirteen-page report was made known while the legal battle between the government and Clarín still awaits a key ruling by the Supreme Court.

In a recent interview, Sabbatella conceded that his short-term plan was to force Clarín to comply with the law, while the famous “new voices”would have to wait.