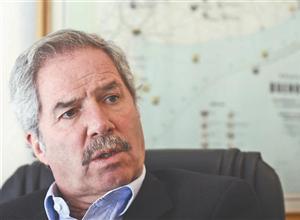 It is been a dizzying 45 days for Felipe Solá. Near the deadline to register electoral tickets, the former Buenos Aires province governor decided to join Tigre Mayor Sergio Massa as a lawmaker candidate and he is now seeking to continue his political career outside both the Victory Front and the ill-fated Federal Peronist caucus. Solá receives the Herald at his office, now temporarily located in a seventh-floor flat near Congress, where two huge maps of the province hang on the wall behind him.

What made you decide to become part of the Renewal Front?
I’ve been taking a middle-of-the-road position since 2011. I had left the Federal Peronist bloc because some of its members rushed to join (Radical Civic Union figurehead Ricardo) Alfonsín, others — like (Alberto) Rodríguez Saá and (Eduardo) Duhalde — had set up some horrible primaries, and I was left there in a political space where the only thread which bound them together was hatred toward the president. I stayed with three other lawmakers, a kind of solitary adventure — it’s hard to work inside a small caucus — but I was looking for a middle-ground position, not to be part of the opposition just because. I know I said some pretty confusing things back then, but it was because I was confused. And I saw that in Sergio Massa. I was afraid in the beginning, but then I wasn’t. When I saw Massa was running for Congress, I decided to join him. I even think I can take some of the credit in helping to convince him to run.

Why didn’t you return to the Victory Front back in 2011?
Because going to the FpV would have meant accepting the iron-fist rule by Cristina (Fernández de Kirchner). I never subscribed to her kind of leadership, although I agreed with some of the laws she backed. But I can’t be a soldier. And men and women in the FpV behave like little soldiers.

How are you getting along with the other Renewal Front candidates? Do you know them all?
I know them all, except for (former news anchor) Mirta Tundis.

What do you think of her?
Well, these tickets ought to be diverse, with all the pros and cons that brings, in order to get to Congress. The Renewal Front ticket is not only composed by a list of professional politicians but also of people who stand out in fields that are important to society. And Tundis has been very involved in the subject of pensioners.

Tundis said she was against the “Fútbol para Todos” programme…
She is not expected to agree with everything we say. Tundis joined the front to make a contribution, not to receive political indoctrination. I can interpret what she meant — that she is against state propaganda during half-time.

How broad is the agreement between the Renewal Front and the PRO party for this election? If such an agreement exists, that is.The accord was with (Vicente López Mayor) Jorge Macri. These desperate attempts by some figureheads to present this agreement as a victory are deplorable. The PRO had no candidate for the Buenos Aires province and they asked us to compete in the primaries in some strong districts. And then two national lawmakers became part of our ticket. Period. Besides, if an agreement between Massa and Mauricio Macri actually existed, where’s the picture?

What do you think of Kirchnerite candidate Martín Insaurralde?
He’s a fresh figure and I don’t think he has been a bad mayor for a complex district like Lomas de Zamora. I guess he is a good choice for the FpV, but he’s virtually unknown in the province and a bit of a “lightwight.” It’s like Kirchnerism needed to be in disguise, to hide the more controversial figureheads.

But what are the differences, to the eyes of the electorate, between Insaurralde’s “light Kirchnerism” and Massa?
That behind all these alleged lightweights there’s Cristina and, especially, the last two terrible years of her administration. If they weren’t so terrible, why are we discussing whether this man (Insaurralde) will receive 30 or 32 percent of the vote when Kirchnerism was elected by 56 percent of the voters in the province back in 2011?

What do you think of Margarita Stolbizer?
I respect her. She’s an intelligent figure. Her only problem is that the very mention of the word “Peronism” makes her nervous. I’m no judge of anyone’s political opinions, but I know when someone is deeply anti-Peronist.

Your hypothesis is that you cannot govern the Buenos Aires province without Peronism.
It’s not a hypothesis — it’s a reality of the last few years.

What’s your opinion of Francisco de Narváez?
He’s an investor. He invested in Peronism, and he’s doing pretty badly.

I need you to bet on the result of Sunday’s election.
I can’t do that. True surveys will appear on Thursday. The others can always be “retouched” as far as science allows. We will be happy even if we win by a small margin. It will be a big step before the October election.

What if the Renewal Front does not win the election?
I don’t know. I’m not a magician nor a political analyst.

Tell me two bills you will push if re-elected as lawmaker.
We’re already presented one regarding the income tax, but we also need to change the way DNU emergency decrees are approved. Right now they are passed into law after being discussed in only one chamber of Congress — that’s absurd. I will also support a harsh law against alcoholism among the youth, which will aim at big producers and distributors rather than retail outlets. I’ll forbid beer companies from sponsoring soccer teams. Alcohol and sports have nothing to do with each other.

As governor you carried out a public security model supported by progressive sectors that is represented by former provincial Security Minister León Arslanian, but last week Massa presented a draft bill to remove the statute of limitations from homicide. Isn’t that at odds with your previous stances?
No. What we did in the province back then was to support a series of reforms linked to police behaviour.

This means that you will vote for all the seven security bills presented by Massa?
Yes, because they’re preventive. If I have to choose between having security cameras and not having them, of course I’d prefer to have them. But we need to go beyond that, too.

Massa is aiming at the presidency. Will you support his potential presidential bid?
I wouldn’t rush to talk about that. First come the primaries, then the October elections, and then we’ll have to see how we are as lawmakers. Don’t count your chickens before they hatch.

I’m asking you because two years ago you printed posters that read “Felipe is better,” and had the dream of becoming president. Some of these posters can still be seen around the block.
In 2011 I wasn’t sure about what to do and I’ve been using those posters since (laughs). It’s a way of saying that I’m still in politics.

So you still dream of being President by 2015?
No, I think my time has passed for that.