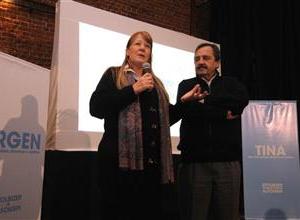 The advertising war in advance of the August 11 primaries has barely just begun, but specialists have already seen the best and worst of the lot in the City and the Buenos Aires province.

‘The most effective ads are those from ruling parties,” claims political scientist María Esperanza Casullo, who runs the news portal Artepolítica. “Few realized that both the Victory Front (FpV) and the PRO party are showing constant strategies, with little differences in their campaigns from previous elections.”

After a first spot was dominated by President Cristina Fernández de Kirchner — leaving many voters asking why the top candidate, Martín Insaurralde, was kept hidden — the Lomas de Zamora mayor was featured in the next two FpV ads.

There, Insaurralde was shown with a laid-back, easygoing attitude. “He even scratches his ear, something widely regarded as a rupture of the narrative,” Casullo explains.

“I think the Victory Front’s campaign is not as good as the one they made back in 2011, when they aimed at different sectors,” he tells the Herald. “Here they’re trying to convey several different messages in just one spot. The general setting is OK, I just think it’s not meant to inspire the undecided voters but rather to reinforce their electoral base.”

The Kirchnerite slogan that insists voters must “choose” between the current slate of contenders (and be responsible for their choice) may be “a warning” against other electoral options, trying to prevent voters from fleeing the Victory Front in a difficult year, says Aboy Carlés.

Casullo notices ads from PRO show a colourful palette with the partisan yellow dominating that — together with close-ups of candidates’ faces — try to indicate warmth. On the other hand, Casullo points out that the FpV “is practically the only Argentine political group that has its advertising in white and light blue,” the colours of the national flag.

Meanwhile, the Renewal Front spot that uses a song from pop singer Axel is effective, according to Casullo. It doesn’t matter if he looks just like another baby-kissing politician, she adds.

“You get the feeling it’s not like the image of Macri with the little girl from the slums (an infamous moment from the 2007 PRO campaign), but rather Massa’s footage taken at actual rallies with real people,” the political scientist says.

Massa’s campaign “is anchored in the emotional and has little political content, a feel-good campaign that can be linked to previous ones by (Buenos Aires province Governor Daniel) Scioli,” explains Martín Becerra, a media expert who is a professor at the Buenos Aires University (UBA).

The ads produced by the Workers’ Left Front (FIT) coalition are the exact opposite of Massa’s campaign, Becerra says.

“They have a strong ideological speech, with explicit political content,” the specialist explains.

Becerra, Casullo and Aboy Carlés agree FIT’s spot on the income tax — a comic approach at a fictional AFIP tax bureau office — is among the best of the lot.

“In previous years, the left didn’t make an effort to reach potential voters,” Casullo recalled. “I remember the time when they would produce campaign posters with overly long statements in small print — now they’ve understood how to do TV ads,” Casullo comments.

Another well-received spot was by dissident Peronist Alberto Rodríguez Saá, who is running in Buenos Aires City with a cheap campaign — no politicians, no actors, just a ballot on the screen with a catchy song that says: “cast your vote for El Alberto.”

Other campaigns were not so successful.

Dissident peronist lawmaker Francisco de Narváez produced a high-impact ad where different citizens occupy the presidential stand to express how “tired” they are of some of the government’s policies.

“His initial slogan (‘It’s you or her,’ referring to CFK) was strong, but this one is very aggressive, not only toward the national government but also toward the viewer,” Aboy Carlés explained.

“It’s aggressive in a campaign where other candidates do not consider aggressiveness as positive,” Casullo explains.

The spot by UNEN’s candidate Alfonso Prat-Gay — where he says he is “grateful” that he was able to live out his academic dream — was not well received, either.

During the ad, Prat-Gay is shown riding a car (instead of walking down the street), using electronic devices and smiling at fellow candidate Victoria Donda.

“His ad recalls the ‘sad rich kids’ line,” Aboy Carlés says in reference to an infamous campaign motto by former President Carlos Menem. “The partnership between Ricardo Terragno and Martín Lousteau, on the other hand, has taken a more ‘proactive’ approach.”

Aboy Carlés blasted the Civic and Social Progressive Front (FPCyS) ad which presents two rivals countries (“Argen” and “Tina”) in order to show the division caused by the national government in Argentine society.

“There’s a big mistake here of magnifying an alleged social unrest supposedly caused by Kirchnerism. Fights can break out between intense minorities, but society as a whole is not quite represented there,” explained the sociologist. “It’s not the same division that existed in families during the first stages of Peronism in the 1950s.”

“It’s not a sound electoral campaign strategy. Everybody knows the fight in the Buenos Aires province will be between Massa and the Victory Front but, as this is a midterm, there is no problem with Margarita Stolbizer taking a respectable third place,” says Casullo. “I would have made a spot more based on the Radical (UCR) identity and their steady presence in the province.”

Becerra thinks there’s a wider problem with the ad.

“Their slogan is ‘venimos a unir’ (We come to unite). But everybody knows Stolbizer and Ricardo Alfonsín, who lead the FPCyS ballot, are part of the hardcore opposition to the national government. To propose a union from that position would be kind of erratic,” the professor says.

Adriana Amado, a professor at the University of La Matanza (UNLaM), has doubts on the ability of campaign ads to change the mind of the electorate.

“No studies have been conducted on the effects during the last PASO primaries, but we could assume that in Argentina the ads work like in other countries, reinforcing previously held concepts,” says Amado.

She then referred to the semi-spontaneous campaing “A miracle for (presidential pre-candidate Jorge) Altamira,” championed in 2011 by radio host Jorge Rial, who helped the left wing leader gather the 400,000 votes he needed to make it to the October elections.

“That means the most effective campaign of the last election was not made by an advertising firm,” Amado said.

Judging by the thousands of hours of campaign airplay, it seems obvious politicians disagree.