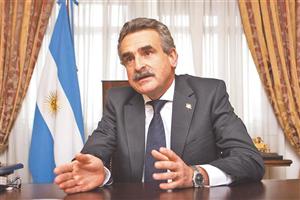 The day’s last rays of sun enter the office on the 11th-floor of the Defence Ministry, where Agustín Rossi has been working during the past 100 days. Metres away from the Government House, it is quite a different work environment for the former head of the Victory Front caucus (FpV) in the Lower House, where he got used to the hot political climate of congressional politics.

Two years ago, President Cristina Fernández de Kirchner signed a decree creating the Northern Shield (Escudo Norte) to patrol the country’s northern borders. Last week, you announced the deployment of 4,500 army officers to help Border Guard officers in that task — isn’t that at odds with the Domestic Security Law?
Definitely not. The resolution that established the so-called Operativo Fortín, signed by (former minister Arturo) Puricelli, described the involvement of the Armed Forces in this operation. Ever since then, the Air Force has been controlling the radar system that went along with the Northern Shield. Whenever irregular air activity is detected, the information is passed to the appropriate security force — which in this case is the Border Guards. We just inform.

So with this new decision will the Army begin patrolling?
Patrolling — yes. But we won’t be doing activities related to domestic security: stopping vehicles, checking documents. Nothing of that sort.

Why was this decision taken? Have you noticed an increase in “irregular activities” in the north?
During the dinner with officers and leaders of the Armed Forces (in July) the president had already ordered me to prepare a deployment of Army soldiers to control the northern border, which is Argentina’s most important land border. The decision was already taken back then — we’re just strengthening the operation.

What are the tasks of the Military Coordination of Emergencies Assistance Secretariat (Secretaría de Coordinación Militar de Asistencia en Emergencias) created last June?
During the last few years we’ve seen that the role of the Armed Forces during emergencies has been well received by society. They bring in discipline, deployment and logistics capability — concepts which are highly appreciated when a catastrophe occurs. The Armed Forces showed what they were capable of in the La Plata floods and then again in Rosario, when they took part in the rescue operations (following last month’s gas explosion). We’re trying to intensify the role of the forces in emergency matters and to create equipment centres to have on hand in case of an emergency.

What about the appointment of Army Chief César Milani? After a heated debate, the President decided it will be discussed in Congress after the October elections — is that still the idea?
His promotion is in the Senate. But his appointment led to a debate that was marked by the launch of the electoral campaign. Army Chief appointments don’t have to be examined right away — it was more of a decision by us, but we could have sent the promotion in November or December, when the rest of the promotions are discussed.

So the government is going to defend his appointment once again before the end of the year.
That’s right.

The Centre for Legal and Social Studies (CELS) requested the rejection of Milani’s appointment because of his alleged violation of human rights. How is the relationship with CELS, being that the human rights organization supports the national government in many areas?
Very good. See, the CELS asked for a rejection based on a document that, according to us, was not strong enough. The document they claimed to be new — the Tucumán file — was actually not new but that information was sent to the corresponding jurisdictions for Justice to have the final word.

What is your opinion on the Victory Front performance in the primaries?
Under this electoral system, we actually have a single election divided into two chapters. So I discourage analyses in the middle of the electoral process — we’ll be able to talk about it after the October 27 elections.

But Kirchnerism did poorly in many important districts. Is there a way of turning around this situation before the general election?
We’ll have to act differently in each district. We need to work on our electoral potential and show the results of our 10-year administration.

Over the last few weeks, the idea that Cristina Fernández de Kirchner would pursue a third term has lost its strength. What do you think the two years ahead will be like?
As a bloc we never worked to amend the Constitution — it was an agenda pushed more by the opposition than by us. On the other hand, Cristina (Fernández de Kirchner) is not only the head of state, but also the clear leader of the Victory Front. There’s no other leadership in contemporary Argentina that had to face so many challenges, and yet she recovered from them and built a political force that was widely legitimized in the last presidential elections. So I think she will continue to lead the country according to that electoral contract and with her intense leadership.

Judging by your words, I guess you are the kind of leader who does not talk about potential successors.
Good guess (laughs). There’s still a long way to go.

Are you comfortable in this new role?
Yes, I’m very happy. (Pauses) It’s different. There are a lot of differences. But I’m looking forward to continue achieving new goals in the ministry.

You have led the Kirchnerite bloc in the Lower House for seven and a half years. Don’t you miss it a little bit?
No. The president called me on a Thursday afternoon to tell me I was going to be Defence Minister. When I got out of that meeting, I went to my office, said I needed to clear my belongings, and I started thinking about defence matters. I closed the door on a good tenure.