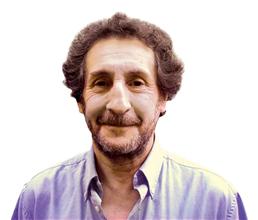 Argentine journalist Eduardo Blaustein is best known for Decíamos Ayer, a take on the role of the printing press during the last military dictatorship that has become a classic in the genre. His latest book, Years of Rage (Años de Rabia, published by Vergara) analyzes the troubled relationship between Kirchnerism and the press — in other words, the government’s rage against the (media) machine.

Why do you say the high-outrage situation is not a Kirchnerite invention?I call the government’s fury against media outlets “rage.” Presidents have long feared what the media say about them — (Raúl) Alfonsin did, (Carlos) Menem did, (Néstor) Kirchner did. Obviously, Kirchnerism has its own excesses and passions. Some of them are kind of skewed, and end up hurting the government — but others are quite reasonable. For example, when Menem decided to withdraw from the 2003 presidential runoff (La Nación deputy director Claudio) Escribano wrote furiously against Kirchner even before he took office — thus provoking Kirchner’s harsh reply. But while La Nación’s stance is heavily ideological, Clarín’s opposition to the national government is destructive, corporate. The Clarín Group is very conscious of its own power.

Do you think Clarín reacts more furiously because it was once a Kirchnerite ally?

The problem with that question is that it analyzes the situation from a personal framework rather than structural. But Clarín’s executives have kept a cool head so as to avoid criticizing the government like a scorned woman. They calculated their moves and scored a triumph by bringing (journalist Jorge) Lanata into the team.

The conglomerate mounted a scheme to keep control of the agenda that begins Saturday with Lanata’s op-ed, continues on Sunday with his TV programme Periodismo para Todos that ends up in the newspaper’s print edition one day later…
This mechanical repetition is one of the best arguments in favour of the Broadcast Media Law. Now, it will be fun to see how this relationship ends, because they already served each other’s interests. I won’t be surprised if a potential break-up between both parties comes with a scandal.

In your book you acknowledge that the Clarín Group has been quite effective when it comes to connecting with its audience. How do you explain the phenomenon?
Clarín has developed a 68-year-old cultural bond — it’s not something a government can achieve in a few years. When Clarín buys Channel 13, it buys something that already has a significant cultural weight. I mean, Telenoche exists since the sixties. They have strong relationships with audiences — especially with urban middle classes.

On the other hand, you say Kirchnerism has somewhat failed at attracting media audiences, is that correct?
Kirchnerism tried to reply with its characteristic coarseness and finds it terribly difficult to have an open discussion. I think the creation of (TV programme) 6, 7, 8 was useful, especially to spread certain discussions, but then they became insular. Kirchnerite printed media, which, somewhere between 2008 and 2009 were useful to keep their voter base, were largely unable to obtain professional management and open up. But it’s hard to communicate issues from the state.

Maybe the pro-Kirchnerite press does not perceive changes in audiences the way the Clarín Group does.
But now it would be too late to try a different communication approach, anyway. Even if (Martín) Caparrós, (Cristian) Alarcón and (Reynaldo) Sietecase were given a voice (in pro-government media outlets), the other media giant will still be there and the fight would still be rather uneven. I also think this government must have produced some major changes to be able to survive this level of aggression (from Clarín). That’s the other way of looking at it.

Wouldn’t you like to see more criticism to some measures in pro-government media?
There has been, in fact, some criticism — over mining activities, the use of chemical pesticides or the latest appointments in the Security ministy, which have been resisted by part of the press and even some in the government. But these spaces somehow reflect the current political leadership. For example, (Cabinet Chief) Juan Manuel Abal Medina, a guy who came from (centre-left party) Frepaso, suddenly plays the role of the tough Kirchnerite — I don’t buy it. Same thing happened with the press conference headed by (vice-president) Amado Boudou: a cool guy faking the bad Kirchnerite role and talking about “Clarín’s henchmen.” Come on! I like the calm speech of (Jorge) Taiana. Or the ones from (Carlos) Tomada, Agustín Rossi, (Florencio) Randazzo talking about effectiveness and government administration…

One of the chapters is devoted to Kirchnerism in Buenos Aires City and its troubles to connect with porteños, including the issue of candidate Daniel Filmus not attending debates on the Grupo Clarín premises. Why is this so important to you?
I think it’s stupid that they didn’t take part in the debates held on (news channel) TN. One could say they destroy you in the editing room. But at the same time, fuck you, this is politics. You have to go everywhere. If you stay only with Tiempo Argentino, you haven’t opened up the debate. I wrote something similar back in 2008, when (former and late President) Néstor Kirchner disappeared from the media. I wondered: with such power, why choose exile? I think they were huge mistakes.

What do you think of the presidential language?
Cristina (Fernández de Kirchner) displays great versatility. We fill our mouths talking about increasing the level of debate, but when a leader like her comes around and uses complex speech, she suddenly sounds pedantic — a paradox. I’m excited with the amount of attention factory workers give to her speeches, listening to her as if she were Fidel Castro. That seems invaluable to me.

Are these hard times for journalists in Argentina?
These are complicated times, indeed. On the one hand, journalism practices and media concentration have been extensively discussed, which is very valuable. But media companies have limited the freedom of workers more than they did back in the nineties. And as a reader, to be able to catch the most interesting things you need to either be a very disciplined person or a highly engaged reporter, and read the two or three journalists from each newspaper who are worth reading. But that’s an heroic exercise — you can’t ask everyone to do that.