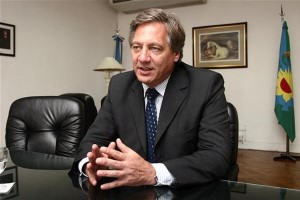 In December, former provincial lawmaker Iván Budassi was appointed by Buenos Aires province Governor Daniel Scioli as the new head of the Buenos Aires provincial tax bureau ARBA. Like many other districts across the country, the province seems to be in urgent need of funds following the police salary hikes of December and the upcoming wage negotiations with health and teachers unions — and Budassi is the man in charge of bringing in 87,000 million pesos to the provincial coffers. In this Herald interview at ARBA’s subsidiary in downtown Buenos Aires City, this key ally of the Scioli administration says a taxman “does not need to have an evil face” in order to do his job.

What have been the results so far of the high-impact ARBA campaign along the seaside resort towns of the Buenos Aires province?
First of all there is an unprecedented collaboration between ARBA and the AFIP federal tax bureau. Before, when we wanted something from AFIP, we needed to ask them for every CUIT (tax payer identification number). We are now able to go into its systems containing taxpayer data. At the same time, AFIP can use our satellite detection. The greatest example are the luxury homes we “found” in Pinamar or Cariló. If anyone puts those addresses on Google Earth, they will only see pine trees. With the aid of 13 NASA satellites, we’re now able to see what’s beneath those pine trees. It’s a revolution for the Argentine tax system and a great opportunity to detect tax avoidance.

Can you tell me some of the main statistics of the campaign?
During the first month, 160 beaches were investigated. Five percent of coastal resorts were not even registered and did not pay any income tax, so they were immediately closed down. Infraction citations were issued for more than 6,500 retailers — most of them restaurants or clothing retailers. Only 22 percent of those shops had a postnet service, that is, only 22 percent of retailers were allowing consumers to pay with credit or debit cards. We’re trying to set up the conditions so that every store owner will be able to set up a postnet service. We spoke with Banco Provincia head Gustavo Marangoni and he told us that retailers installing the system were given a six-months grace period, and that for the next six months shops only paid 180 pesos plus value-added tax (IVA) per month — less than a single service charge in one of those fancy restaurants. The other campaign we launched is called Pedí Factura (Ask for a receipt).

A strange episode triggered the campaign…
I was having lunch with my teenage kids at a coastal resort and I found it impossible to get a receipt. The owners of the first restaurant we went to, a very nice place by the Quequén river, were looking at me as if I were a madman when I asked them for one. I told them I worked for ARBA and that the situation was outrageous. I went swimming. When I came back, they gave me a receipt from the store next door, a beach cottage rental company. It was receipt number 0001. In Pinamar, I was “luckier” — a very well-known food chain gave me receipt number 0002. My initial protest went through the social networks and received widespread acceptance, which is very useful for us, because the Buenos Aires province is the size of Germany or Italy, but we only have 6,000 employees to control its businesses.

How is the new plan of pre-emptive foreclosures going?
It’s going well. It was a necessary plan. When we first came to office we asked ourselves: How can we let a non-registered retail to run a business, if they haven’t even presented a single set of sworn statements? They’re like a driver without a licence.

What has been the most glaring example of tax evasion you uncovered this season?
A 600-square-metre house in Pinamar. The place was gorgeous, heavenly, almost by the sea. In front of the house there were three imported cars, two quad-bikes… If this is the beach home, we cannot even imagine what their regular home looks like. We rang the bell, the owners acknowledged the house had been built a year ago, but they blamed other professionals (architects, accountants) for failing to declare the property — a classic. We asked a nearby policeman that was on guard and he told us a police car was constantly cruising the area. So there was a brutal contrast between the owner’s attitude and the effort in investment made by the province.

ARBA has vowed to raise 87 billion pesos this year. Has the goal changed with the current growing inflation?
This year’s goal was set by the Budget — and the governor ordered us to reach it without any new taxes, so we’re actually running from behind. There has been a considerable rise in prices during the first month of the year, but we believe that following the peak of devaluation prices will tend to stabilize. Maybe an increase in farming activity can help us, considering the current value of the dollar. But we don’t think that the inflation rate would be very high after these first two months.

What style of leadership will you impose on ARBA?
When people talk about ARBA they usually refer to a very colourful figure, a Córdoba-born BA province resident called Santiago Montoya, who adopted harsh stances at a time when tax awareness needed to be increased. When I was in college I remember there was this very “criolla” kind of culture of boasting about not paying taxes — and we’ve come a very long way. I have a particular way of explaining things, it goes back to my time as a teacher. I don’t think the taxman needs to have an evil face nor the personality of a rottweiler.