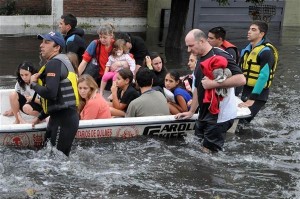 Almost a year after the heavy rains and flash floods that affected the city of La Plata, Judge Luís Arias yesterday determined that 89 people died during the flooding — 38 more than what the Buenos Aires province government had officially informed.

In a 191-page ruling of high political impact, the magistrate ordered the Daniel Scioli administration to “publicly reveal the result” of this new investigation “through the same media outlets the government used to reveal the information in the first place.”

After months of investigation, Arias concluded that several irregularities had taken place in the days after the flood of April 23, 2013 — and that both the local Executive and Judicial branches were to blame.

Irregularities include the signing of false death certificates by officials of the province’s Peoples’ Registry (Registro de las Personas), “which resulted in public documents that did not reflect the true nature of the event, or in showing it in a distorted way” — meaning that the goal of lying about the death certificates was to hide the true scale of the catastrophe.

“Evidence gathered so far in order to recreate the situation took a new dimension considering the context of falsehood, hiding, mistrust, confusion and catastrophe” following the floods in the province’s capital, the magistrate wrote.

The judge ordered both the local Legislature and the Executive Branch to “regulate, adapt and/or modify the proceedings and practices that allowed for such irregularities.”

According to judicial sources, Arias will explain the basis of the ruling to relatives of the victims today at 12.30pm during a press conference to be held at the journalism school at the University of La Plata.

Days after the floods, both Scioli and the then-provincial Security Minister Ricardo Casal confirmed the death toll remained at 51, despite complaints by opposition leaders and victims’ relatives.

On April 6, Scioli dismissed other reports and called on people “not to distort a situation that is already dramatic.” That same day, Casal criticized Arias and Prosecutor Julián Axat for distributing a list with the names of seven other people who allegedly died during the storm.

But Arias did not take back what he said and announced that he would formally request hospitals in the affected areas to submit reports on what happened during the flood — the first step toward yesterday’s ruling.

“What Arias writes in his decision is what we’ve been saying all this time — that there was a deliberate attempt to hide the real numbers,” Civic Coalition (CC-ARI) representative Walter Martello told the Herald.

“The judge is saying that the province refused to add new names to the list of fatalities after the first 48 hours, something unprecedented and unknown in any other part of the world when a tragedy of this scale takes place,” Martello added.

On its face, the ruling coincides with Axat’s previous statements.

In November last year, the prosecutor said that there was strong evidence suggesting that a “spurious concealment method” had taken place with the Scioli administration’s attempt “to falsify the deaths caused by flooding” by making them appear to have been the result of natural causes.

Yesterday, Axat highlighted the magistrate’s decision, which — he said — proved the downside of a “self-governed” Buenos Aires provincial police force.

Local politicians “resort to the BA province police, which in turn engage in the usual tactics to prevent the public image of their bosses from becoming tarnished, at any cost,” the prosecutor wrote.