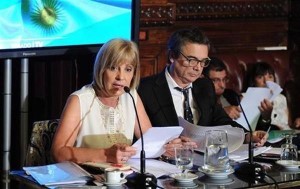 Telecommunication companies will not be allowed to provide satellite TV services and cooperatives will receive special funds that will help them compete with big players. These were the two major amendments made to the Digital Argentina bill by lawmakers from the ruling Victory Front (FpV) following criticism and suggestions for the regulation — set to replace the 1972 Telecommunications Law — which was first announced last month.

The bill was yesterday cleared for debate during a meeting of the Media and Freedom of Expression Committee presided over by Senator Liliana Fellner (FpV-Jujuy). The Cristina Fernández de Kirchner administration now expects to have it passed in both houses of Congress by the end of the year.

The new bill establishes that the government should “guarantee competition and push for the development of regional markets,” with the goal of avoiding asymmetries between companies.

Enforcement authorities are encouraged to implement regularization programmes for small-sized cable TV providers operating in the country’s interior, allowing these firms to get their paperwork in order.

“It’s been said that Digital Argentina would end up benefiting the communication powers-that-be, but that’s not true. The voice of small- and medium-sized companies is included in several articles of the bill,” Fellner said yesterday. “The rights of telecommunications cooperatives and small-sized companies will be protected.”

In previous weeks, representatives from such firms had stressed that in their current form the articles did not “distinguish” between their small-scale operations and companies having dominant market positions. This was a worrying fact as the new bill allowed for the renting of space on existing telecommunications networks that have been established by their competitors in exchange for a fee.

In this context, representatives noted that they would struggle to compete against large telecommunication companies like Telecom or Telefónica if they had to lend them their infrastructure.

Following the latest changes, telecommunication companies should abide by “exclusion zones” yet to be determined that will prevent them from offering broadcast services immediatly after the law is passed.

Article 8 says companies offering telecommunication services must obtain a licence in order to operate. The following article specifies that all firms are obliged to register whether these companies offer “landline or mobile, hard-wired or wireless, national or international, with or without infrastructure of its own,” with the enforcement authority.

Activist groups like the Argentine Pirate Party argue that this (together with Article 6 that includes a broad definitions of “information and communications technology services”) may force even small manufacturers with a mobile app in the marketplace to register as a telecom provider with federal authorities.

Nevertheless, the Pirate Party — a staunch defender of users and their online rights — hailed changes made to other sections of the bill, such as the chapter regarding net neutrality, that is, the concept that Internet service providers (ISPs) must treat all traffic as equal.

As the Herald reported earlier this month, the Digital Argentina bill unveiled in October used such broad language that some worried it could become meaningless, especially since lawmakers have been discussing the issue in the Freedom of Speech and Media Committee for one year and seven months. (In its first draft, the measure only said that the country’s leaders will “guarantee” net neutrality.)

Now most of the issues that have already been discussed in the Senate committee were added to Digital Argentina, including a set of prohibitions. If the bill is passed, telcos will not be able “to block, interfere with, discriminate, hinder, nor restrict the right of any Internet user of using, sending, receiving or offering any content.”

The incorporation of the Senate’s opinion will also mean companies will be obliged to provide customers with minimum connection speeds. The speeds, still to be defined, must be revised every two years.

Another major modification is that the bill now confirms landline telephone as a “public service,” which ratifies the government’s authority to regulate tariffs. The first draft had declared the service a matter of “public interest,” which at the time was seen as a way of de-regulating the market.

“My main concern with the bill is that it is still leaving the main definitions and the concrete implementation of the law to an enforcement authority to be appointed by the Executive branch,” Gustavo Fontanals, a media expert and investigator at the University of Buenos Aires (UBA), told the Herald.

“This authority will be in charge of defining the main aspects of the regulation, that is, the degree of openness of local networks, the implementation of differentiated tariffs, the definition of companies having ‘significant market power’ and the measures to promote competition, among others.”

In this regard, the bill echoes the main problem with the current regulation: the concentration of all important decisions in the top ranks of the Executive branch.

“This means there will be no institutional channels for the participation of public agents such as Congress, academic representatives, consumers’ associations or related businessmen,” Fontanals said.

Until now, the sector’s companies are overseen by the Communications Secretariat led by Norberto Brenner.

“It’s a good move not to allow telcos to offer satellite TV, but this issue with the enforcement authority — that is now too discretionality — must be solved as well,” Carrier wrote on his Twitter acount.

Opposition blocs have so far failed to comment on the amendments to the bill.

Senator Gerardo Morales (UCR-Jujuy) said his colleagues needed “at least one week to analyze them” and asked Fellner for a week’s time before the committee gives its opinion. But the FpV representative said “all voices had been heard” and went on with the decision, which passed with the FpV’s majority.

The government wants to discuss the issue on the floor next Wednesday so as to allow the Lower House to secure its final approval before the end of the year.