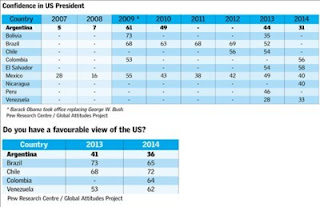 Anti-US sentiment is running high in the country, with a recent poll indicating that only 36 percent of Argentines have a favourable view of the United States.

The staggering figure is a full five percent lower than last year and the lowest of the Barack Obama era, the survey — conducted by the Pew Research Centre — revealed.

Experts consulted by the Herald argued that while the US has at times been a scapegoat for the local political class since the mid-20th century, developments like the role played by the International Monetary Fund (IMF) in recent years, and the failed promises of the Obama administration have led to disenchantment with the world’s number one economy.

Uncle Sam’s popularity in the land of tango is the lowest in Latin America, way below figures from other key countries in the region such as Chile (72 percent), Brazil (65 percent) and Venezuela (62 percent). In fact, Argentines seems to be even more “anti-American” than Arab nations like Tunisia (42 percent) and Lebanon (41 percent).

In a list of G20 nations, ranked according to their “favourable” views of the US, Argentina scores among the bottom three spots, with admiration of the US only lower in Russia — a long-time foe of Washington — and surprisingly, in Turkey.

Carlos Escudé, scholar and former foreign policy adviser to the Carlos Menem administration, said he was not surprised by results.

“Argentines have in mind that our country historically entertained not-so-good relations with the US — unlike other Latin American nations such as Brazil,” Escudé told the Herald.

“The conflict comes from long ago, when Brazil and the US became members of the allied coalition that participated in World War I. These smooth relations continued beyond the forties and into the postwar period, while Argentina was being economically boycotted by the United States,” Escudé recalled.

According to historian Mario Rapoport, Argentina has “never been understood” by the US.

“I’ve read scores of diplomatic documents where the US talks about Argentina and vice-versa, and there’s an incredible amount of verbal violence when they refer to us, and not so much the other way round. The accusations of Nazism against Argentina were always led by the US, and they weren’t really true,” Rapoport argued.

Both specialists agree about the role of the economy in the historic rivalry. In Escudé’s view, “the Brazilian economy, unlike Argentina’s, got developed in a way which was complementary to that of the US,” while Rapoport adds that “Brazil sold the US its coffee, Chile its copper, but Argentina was seen as more of a competitor.”

One should also take into account the appeal that Europe’s always had to the Argentine elite and middle classes, Escudé said, explaining that other countries which have also clashed strongly with the the US such as Mexico or more recently Venezuela have, instead, “a strong US influence at a very popular level: I mean, people play baseball, something unthinkable in Argentina.”

Even though some specialists trace the conflict back to the early 19th century, when Argentine conservatives favoured the UK over the rising US, the first tenure of Juan Domingo Perón is widely seen as a turning point in the popular sentiment regarding this rocky bilateral relation.

Perón won the election with the historical slogan “Braden or Perón,” which confronted him with the then US ambassador Spruille Braden, a businessman tied to the United Fruit Company and Standard Oil, who had accused Perón of being sympathetic towards the Nazis. Even if relations with the US improved afterwards, with Perón signing an oil contract with California’s Standard Oil, large parts of the labour movement would go on to fondly remember Perón’s period with the chant “neither Yankees nor Marxists: Peronists”.

“Argentina has a very politicized society, there are pro- and anti- feelings about everything. And the relationship with the US has been politicized since, at least, the 1940s,” says political scientist María Esperanza Casullo, who runs the news portal Artepolítica.

The sentiment has deepened in recent years, Casullo added.

“Overexposure of IMF officials during the 2001 economic crisis surely added to the mix,” she says, and recalled the fact that Anoop Singh’s IMF mission to Argentina Anoop Singh made it to the local headlines for almost a year.

“In any other country no one would recall the surname — not to say the face — of a third-rank official of the IMF,” Casullo argued.

During the 1990s, Argentina held a close — “carnal”, in the words of then-Foreign Minister Guido di Tella — relationship with the United States, but the decade ended in tears, with a five-year recession started in 1997, for which the US ended up getting a significant portion of the blame.

“Di Tella and (his predecessor Domingo) Cavallo tried to changed Argentina’s political culture toward the United States in the 90s,” explained Escudé, who was part of that effort, “but regrettably it failed.”

In his view, this has meant that the US remains a convenient scapegoat used by the political classes to try to influence the mood of the masses in the local political battleground.

A more recent shift was the country’s opinion of the incumbent US president. Confidence in Obama has fallen from 41 to 31 percent in just one year. It is not only the lowest in the region (even 33 percent of Venezuelans have a positive view in the US president) but the lowest since the Democrat leader took office in 2009.

At the beginning of the first Obama administration, 61 percent of Argentines were confident in the powerful head of state (a major improvement since the all-time-low seven-per-cent popularity of George W. Bush). But trust has been eroding ever since.

“The war against Iraq launched by Bush had a major impact here,” Casullo said. “But we must not forget that Obama’s policies toward the region are very similar to the ones of his predecessor.”

Historian Mario Rapoport seems to agree — but with a disenchanted twist.

“Argentina was never a major area of interest for Obama,” Rapoport told the Herald. “As a matter of fact, the country has never been a priority for the US when it comes to its relationship with Latin America.”

But the sentiment is a two-way street, the historian said.

“Argentina has always maintained privileged relations with Europe in terms of markets and cultural affinity.”

The US free-market culture is much less trusted than Europe’s economic ideas, seen as more friendly to the idea of state intervention.

Most recently, the US administration was seen as unsopportive of Argentina’s position in the sovereign debt conflict with the Paul Singer-led vulture funds in New York’s courts, with President Cristina Fernández de Kirchner complaining about Obama’s lack of intervention, compared to when even his predecessor George W. Bush helped Congo in a similar case.