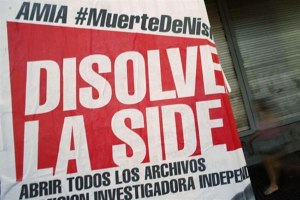 The all-out intelligence war that has plagued the country over the past few weeks has led President Cristina Fernández de Kirchner to call for a wholesale reform of the secret services.

For many this reform is long overdue. Over the past few days, the Herald has talked to experts about the issue, who explained possible reasons for the lack of concrete action on this matter and emphasized that it is essential to differentiate between a mere shakeup of top leaders and a comprehensive, democratically minded reform of the intelligence sector.

“Since its origin, the Intelligence Secretariat has been linked to military power. In fact, the agency strengthened with each military dictatorship,” sociologist and National Scientific and Technical Research Council (Conicet) researcher Paula Canelo told the Herald.

It was Juan Domingo Perón who created the relatively small State Intelligence Coordination (CIDE), but dictators Pedro Aramburu — head of the “Revolución Libertadora,” the military government that overthrew Perón in 1955 — and Juan Carlos Onganía expanded its objectives and personnel, renaming it the State Intelligence Secretariat (creating the now-famous acronym SIDE), a structure that lasted until 2001.

Canelo, one of the country’s foremost experts on military issues, said the turning point was the 1976 coup d’état, after which the spy agency became one of the major limbs of the repressive regime led by Jorge Rafael Videla.

When democracy returned to the country and Raúl Alfonsín took office in 1983 there was an authoritarian character to much of the intelligence arm of the government.

Under Alfonsín, the SIDE remained one of the few areas that was granted a confidential budget, able to spend money at will without oversight, Canelo recalled. The intelligence agent Raúl Guglielminetti, for instance, was even part of the presidential security detail.

“Starting in 1984, the government tried to purge the SIDE, sweeping aside high-ranking officials from the secretariat, because it knows the intelligence agency is one of the offices still dominated by the Armed Forces.”

Their response was almost immediate.

“The level of political dispute, attacks and internal upheaval was very acute. It was quite clear that Alfonsin’s effort to purge the agency had resulted in a dramatic increase of the so-called ‘unemployed workforce’ of former spies,” the expert added. “This is one of the keys as to why governments would not dare to implement reforms of the intelligence system.”

Too many powerful people without jobs.

The intelligence system during the conservative government of Peronist leader Carlos Menem was further damaged by the 1994 bombing of the AMIA Jewish community centre as the SIDE played a major role in the cover-up of the case, said Paula Litvachky, director of the justice and security area of the CELS human rights organization.

Former car dealer Carlos Telleldín was illegally paid US$400,000 by former federal judge Juan José Galeano to provide a false statement to implicate Buenos Aires province policemen in the attack — money that came directly from the SIDE coffers.

“In the AMIA case this was pretty clear, when we note the relationship between special prosecutor Alberto Nisman and some areas of the Intelligence Secretariat. The very Judge (Rodolfo) Canicoba Corral talked about these ties,” Litvachky added.

But before purging the SIDE, democratic governments faced another titanic task: creating a single, national intelligence system, because “the partial reforms that took place during these years were the result of immediate political needs,” Canelo said.

The National Defence Law was approved in 1988, following the Carapintada Army mutiny led by Aldo Rico. The Domestic Security Law came next, approved in 1991, in the midst of the attack on the La Tablada barracks. And then there was the National Intelligence Law that had been quickly approved in November 2001 during the administration of Fernando De la Rúa — and was widely seen as a direct regulatory response to the September 11 terrorist attacks.

According to the Conicet expert, one of the greatest achievements of that legislation — which transformed the former SIDE into the Intelligence Secretariat, or SI — was preventing the military from taking part in domestic security affairs. Other than that, it failed, stopping short of the most important task.

“It was a national intelligence system that was based on a basic consensus. But it was not thought of as the legal framework for democratic governance of intelligence.”

“It was a good law, and it meant a step forward because it explicitly forbid anti-democratic practices such as domestic espionage,” Álvarez Ugarte told the Herald.

However, he said, one of the problems with the law is that it concentrates the capacity to wiretap private communications inside the Judicial Observations Office (DOC), referring a department working for the courts best known as the “Ojota.” (Fernández de Kirchner called for the dissolution of this department last night as part of her broad intelligence overhaul).

“This concentration means that no security force is — theoretically — able to intercept private communications and that any judge who wants wants to authorize a wire-tap must do it through the Intelligence Secretariat, an organism that is controlled by the Executive Branch.”

The ADC expert brought up the issue of the internal intelligence rift, that not only includes veteran spy Antonio “Jaime” Stiusso, a high-ranking intelligence official who has outlasted all the administrations since the early 1970s — including 12 years of Kirchnerite governments.

This battle also involves Army Chief César Milani, a former head of military intelligence, who’s reportedly more trusted by the president than the SI itself. It may also explain the intelligence shake-up of last December, when SI’s chief Héctor Icazuriaga and his number two, Francisco Larcher lost their positions.

“In our last reports we talked about cases of abuse involving former SI agents that have become part of a network of self-employed spies, as well as (cases of abuse) by Border Guards and the Federal Police,” Álvarez Ugarte said.

The problem goes beyond the SI and also includes security forces and the Armed Forces, he concluded.

In that sense, Canelo says it’s necessary to distinguish between two problems.

“One thing is to clean up the mess, to conduct a sweeping purge (of the agency). But there’s another level that involves creating a democratic national intelligence system.”