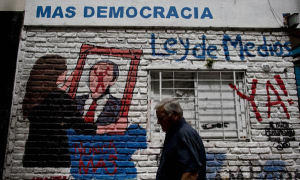 It’s over. President Cristina Fernández de Kirchner will not be able to split up the Clarín Group before she steps down from office.

Judge Pablo Cayssials yesterday issued an injunction freezing the forced divestment of the country’s largest media conglomerate, as ordered in October by the AFSCA media watchdog, following a claim by a number of the group’s journalists.

The judge even resorted to biological imagery to stress that the legal feud between the government and the country’s largest media conglomerate is only getting started, saying the case was still in the “larval stage.”

The AFSCA, led by Martín Sabbatella, “began the forced divestment process… without a previous notice that would have allowed the affected group to comment on it,” the judge said. That means resolution 1121/14 “may affect the freedom of expression” of the journalists who filed the lawsuit requesting the injunction.

This is the second preliminary injunction granted to the media group led by CEO Héctor Magnetto: a similar one was issued in November by Civil and Commercial Judge Horacio Alfonso. Both measures make clear that AFSCA will not be able to move forward with the appraisal of Clarín’s licences and the call for tenders for its excess licences.

“Anyone following the case would have been able to see, from the very day Sabbatella told reporters he was moving forward with the forced divestment of Clarín, that this would lead to a long legal battle,” media expert Martín Becerra told the Herald.

The first thing Judge Cayssials did was to accept Julio Blanck, Nelson Castro, Jorge Lanata, Magdalena Ruiz Guiñazú and other popular Clarín Group journalists as plaintiffs. It was a controversial move, because they were calling to suspend the media watchdog’s resolution on the grounds that the media outlets they work for could change hands. But as AFSCA had argued in its response to the original demand, the law does not grant the right “to choose a specific employer.”

“What’s interesting about this is that these journalists base their case on defending the legitimacy of the Media Law, saying the government is violating its spirit… when we all believed that they — Magdalena (Ruiz Guiñazú) for example — were actually against the very letter of the law,” Becerra said.

The judge also pointed out yesterday that the media watchdog appeared to change its mind half-way through Clarín’s voluntary divestment process — which in turn had begun after the Supreme Court deemed the Media Law constitutional in October 2013.

Even though at first AFSCA “acknowledged it was trying to favour the implementation of the voluntary (divestment) plans… it began the forced divestment process” of Clarín’s excess licences on October 8, 2014 without proper notice, the ruling explained.

His preliminary injunction, the magistrate concluded, seeks to avoid the “irreversible harm” that would result from selling Clarín’s licences, whether one counts the 237 that AFSCA claims the conglomerate holds or the 158 the group recognizes as its own. The move — a logical part of the forced divestment process as set by the law passed in 2009 — includes taking the case to the National Appraisal Tribunal (in order to put a value on the affected assets) and a call for tenders for the excess licences.

Hours after the ruling was known, the media watchdog issued a news release in which Sabbatella spoke about the historical perspective, seemingly acknowledging the case would be long.

“History will remember (the judges who provided the injunctions) as employees of political and media powers who used twisted legal arguments to guarantee impunity and privilege to media monopolies,” the AFSCA chief said.

The national government may now call to join two cases together as it challenges the preliminary injunction — but the last stop of this train is the Supreme Court.

In other words, yesterday’s decision was the last nail in the coffin for those who wished to witness a quick implementation of the anti-trust mandates of the Broadcast Media Law.

The president’s anti-trust dreams — shared by many non-Kirchnerite activists — have come to an end, this time for good. At least for her administration.