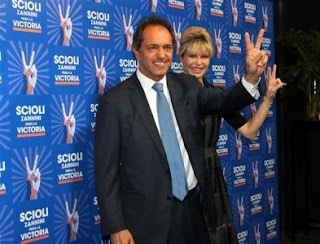 Victory Front (FpV) presidential candidate Daniel Scioli and his running mate Carlos Zannini officially kicked off their electoral campaign last night during a packed dinner at the Costa Salguero centre, located along the coast of the River Plate.

They were joined by almost 3,500 guests, who reportedly paid 10,000 pesos each for a seat. “Let’s protect what we have achieved,” he said.

Scioli emphasized a central theme of his candidacy so far, seeking to champion Kirchnerism’s successes and warn against the risk of changing course.

“Let’s protect what we have achieved,” he said. “ Let’s not enter a lottery. The future is ours to overcome.”

Zannini, President Cristina Fernández de Kirchner’s Legal and Technical Secretary, began his speech saying he felt like there were “some good vibrations here tonight.” But with less than four weeks to go before the August 9 primaries, his speech quickly turned more political.

“We’re common people with important responsibilities,” Zannini expressed. And addressing Scioli directly, he said: “I like you because you know very well what you’re doing.”

Ahead of today’s Mercosur summit in Brazil, Scioli also paid homage to the regional integration championed by various centre-left governments across the region, including President Cristina Fernández de Kirchner’s administration. “We must encourage the integration of the wider Latin American homeland.”

The orange-and-blue electoral slogan “Scioli-Zannini for Victory” could be read on big screens and posters that were set up throughout the complex. Half a dozen young female campaign assistants (wearing the same colours) rushed through the press room early in the evening. Poker-faced, they carried tablet PCs that displayed a map of the building.

Actress Nacha Guevara, who had run with Scioli, late president Néstor Kirchner and former Kirchnerite mayor Sergio Massa on the Buenos Aires provincial ballot in 2009, performed a particular version of ‘Don’t cry for me Argentina‘ (in Spanish, of course).

Black-and-white pictures of late leader Eva Perón were projected on the background.

The event started at 7.30pm. Politicians and “special guests” arriving at the dinner party had to pass through a sort of “red carpet” (which was actually black) where they took questions from journalists.

Scioli’s Cabinet Chief Alberto Pérez commented on a recent poll that had the FpV winning the primaries “40 to 29 (percent)” against the centre-right PRO party.

Are you already seeing an atmosphere of polarization ahead of the elections? the Herald asked.

Without any doubt. From here until October we’ll have to choose between the “red circle” and the “light-blue-and-white circle” Pérez said.

Scioli’s chief campaign adviser Jorge Telerman walked in and out of the complex to make sure everything was in order.

“There will be no show. Just a couple of brief performances” he told reporters. Like a wedding planner, he tried to make sure nobody important missed the event.

“You’re coming down here, darling, aren’t you?” he could be heard telling someone on the phone.

The press room was packed with print, television and radio journalists, most of whom recommendations from organizers to be early. Some had also attended the March 17 PRO party dinner headed by Buenos Aires City Mayor Mauricio Macri, — where guests paid five times more than the amount shelled out by those present at last night’s event — to sit at one of the event’s exclusive tables.

In a room next door, the backstage: dozens of female cooks preparing the food they were about to serve, starting with the traditional empanadas. Hundreds were lying raw on four big black trays. Guests were also offered burrata with prosciutto. Braised bondiola with potatoes was the main course.

“I have no doubts that the governor will become the next president,” Granados told reporters. The former Ezeiza mayor was followed by provincial lawmaker Fernando “Chino” Navarro, a former Scioli critic.

BA province Labour Minister Oscar Cuartango was one of the last officials to arrive.

-You want to go through the whole thing and talk to reporters or you just want photos? – an assistant whispered into his ear.