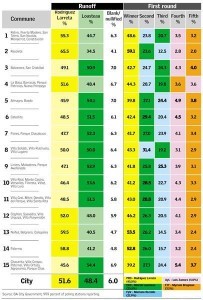 The second round of voting in Buenos Aires City offered very different results to that of the April 26 and July 5 elections. The most striking contrast? For the first time this year, PRO candidate Horacio Rodríguez Larreta failed to win each and every one of the City’s communes.

In fact, ECO mayoral hopeful Martín Lousteau won a majority in nine of the 15 communes — but Rodríguez Larreta swayed the election in his favour thanks to the upper- and upper-middle-class neighbourhoods of Palermo, Núñez, Belgrano, Colegiales and Recoleta.

Larreta: winning Palermo was half the victory

Once again, it was no surprise to see Mauricio Macri’s Cabinet chief take first place in the affluent northern neighbourhoods.

In Recoleta, a record 65.5 percent of citizens voted for the PRO contender, a 6.4-point increase from July 5. Figures for the ruling party were also high in Núñez, Belgrano and Colegiales (59.5 percent of total ballots, a six-point hike when compared to the first round) and Palermo (58.8 percent, also a six-point increase).

It’s difficult to overestimate the electoral importance of this neighbourhood: the 22,300 winning margin the PRO contender received over his contender in Palermo contributed to more than 40 percent of the final margin of victory.

The centre-right force also received a majority in Commune 1, a district that shows multi-class demographics and comprises the Retiro, San Nicolás, Puerto Madero, San Telmo, Monserrat and Constitución neighbourhoods. There, Rodríguez Larreta received 55.3 percent of the vote, almost seven percent more than in the first round.

All in all, the so-called “north corridor” emerged as Macri’s electoral bastion.

Kirchnerite candidates were more careful. Following his third-place finish in the first round, Recalde told his supporters they were “free to choose” Macri’s successor at City Hall. But his running-mate Leandro Santoro revealed he would not vote for Rodríguez Larreta and former mayoral hopeful Aníbal Ibarra (who lost to Recalde in the April primaries) openly endorsed Lousteau’s bid ahead of yesterday’s elections.

Lousteau: a dramatic increase in votes

Lousteau, for his part, ended up winning most districts, an outstanding rise in votes in just two weeks.

Once again, the ECO candidate performed strongest in the middle-class areas of the City, picking up 51.52 percent in Caballito (up from 29.4 percent on July 5), a middle-/upper-middle-class neighbourhood located in the heart of the City, and winning the western Communes 10 (from 53.6 percent) and 11 (51.6 percent), areas traditionally loyal to the Radical (UCR) party.

In Commune 5 (Almagro and Boedo), where leftist candidates put in a good performance in the previous rounds of voting, the ECO leader saw a 27-percent increase in votes, jumping to 54.1 percent.

But the most striking results were seen in the southern neighbourhoods, especially Communes 3 and 8. Only two weeks ago, Lousteau had finished third in those two districts, trailing behind Victory Front (FpV) candidate Mariano Recalde. Yesterday, he received a majority of votes in those areas.

Commune 8, home to the poorer neighbourhoods of Villa Soldati, Villa Lugano and Villa Riachuelo, was the strongest example. There, Lousteau went from 19.2 percent of the vote on July 5 (his worst performance) to win the district by 35 votes yesterday.

In the run-up to the election, many analysts said they believed votes from the southern neighbourhoods were likely to go to PRO, since Macri’s party was well-represented by a number of Peronist figures, from Rodríguez Larreta to his running-mate Diego Santilli to City legislator Cristian Ritondo.