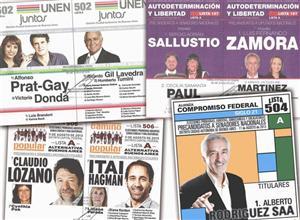 Starting Monday, Argentine politicians will get 44,000 hours of airtime for free thanks to the electoral law passed four years ago. Every party — no matter how small — will be filling radio and television space, which means candidates are finishing to polish the final details of their campaign messages.

To make their message stand out, some politicians are resorting to tactics that will likely raise more than a few eyebrows. Renewal Front leader Sergio Massa will use popular singer Axel as musical background in his radio spots while former San Luis Governor Alberto Rodríguez Saá is going to rely on a classic tango piece with altered lyrics asking voters to cast their ballot for “El Alberto.”

Meanwhile, with some minor changes, the national government will largely stick to the slogan unveiled weeks ago that reminds voters they must “make a choice” in the midterm elections and that the ruling Victory Front (FpV) stands for “choosing love over hatred.”

Ten percent of the total programming airtime will be devoted to electoral purposes, comprising a total of 4,320 seconds each day until August 9, two days before the PASO primaries.

In a classic Kirchnerite style, the Victory Front is sworn to secrecy regarding its TV ads, a mysterious attitude considering the advertisement will not differ greatly from the previous FpV spots, according to an official source close to activist group La Cámpora.

“There will be some minor differences but we’ll keep the main idea, maybe with a couple of different words for variety,” the same source told the Herald.

Lomas de Zamora mayor Martín Insaurralde, who tops the Kirchnerite ticket in the Buenos Aires province, was yesterday reportedly meeting the producers in charge of the campaign.

Insaurralde himself will probably appear in the ads, as the latest polls show the local leader is still virtually unknown in some provincial districts.

Although they lead the polls for the Buenos Aires province, candidates from the Renewal Front (RF) will not get a lot of airtime. “That’s because we’re a new party,” explains Sebastián Galmarini, Massa’s brother-in-law and coordinator of the RF campaign. (Parties receive airtime according to the votes they obtained in the last general election.)

The local figurehead, son of historic Peronist leader Fernando “Pato” Galmarini, says they are polishing the last details of the TV ads, which will feature the front’s candidates for the Lower House of Congress and will contain music by Argentine singer Axel Fernando (or simply “Axel”), author of at least half a dozen popular love songs.

Candidates will be shown on screen as they are not well known among provincial voters —with the possible exception of Massa and former governor Felipe Solá.

A ‘creative boutique’ for PRO

In order to secure a possible victory in Buenos Aires City, which will make Gabriela Michetti and Diego Santilli the first senators for the PRO, the party led by City Mayor Mauricio Macri has been working with creative director Juan Manuel Ricciarelli, widely known as “Papón.”

This “creative boutique,” as Ricciarelli calls it, focused this week on what has been PRO’s slogan since the campaign launch on July 12: “Juntos podemos” (Together we can), a generalist campaign slogan that will try to reinforce feelings of “unity” unlike the “divisions” supposedly caused by Kirchnerism.

Lawmakers Margarita Stolbizer and Ricardo Alfonsín, who lead the Civic and Social Progressive Front (FPCyS) ticket in the BA province, designed their TV ads on a similar note.

“We tried to focus on this divisive thing in Argentine politics, where black-or-white approaches have led to fights and disagreements in families and among friends,” campaign director Marcelo Ferreyra told the Herald. “We are trying to work an idea of unity under our proposals of justice, productivity and transparency —values that our candidates represent. We’re the only ones who can say that.”

The Stolbizer-Alfonsín alliance will present four spots designed by Kepel & Mata agency, each one tackling a different issue: crime, inflation, middle class problems and the “cultural division” among social sectors caused by the national government.

A fifth and final spot will show FPCyS candidates talking directly to camera.

“Positive Energy politics” will be the slogan used by the UNEN-SUMA alliance between former government officials Rodolfo Terragno and Martín Lousteau. Both candidates filmed the ad last Wednesday in Plaza Mafalda, located in the Buenos Aires City neighbourhood of Colegiales.

Their electoral campaign, produced by Rasti Films, was directed by Leandro Mancini and had Sergio Pollaccia as the ad adviser.

While shooting, a pedestrian who was lost asked Terragno for directions, but the candidate replied: “I don’t know.” The pedestrian thanked him and said he would vote for him anyhow, SUMA’s press secretary told the Herald.

Last week some members of Unión Popular, the party led by economist Claudio Lozano, made some noise in Facebook and Twitter with a video criticizing UNEN candidate Fernando “Pino” Solanas, a former Lozano ally who this year joined forces with lawmaker Elisa Carrió.

The video featured a young girl sitting in a café, crying.

“He said he was standing up for me but in the end he stood me up,” the girl said, with tissues strewn around her. Who is she talking to? The camera rolls and we see Solanas smiling next to Carrió in the studio of news channel TN.

However, this spot —made by activist group Marea Popular— will not be televised.

“We’ll broadcast a pretty formal ad that represents all forces behind Unidad Popular,” Lozano’s spokeswoman Virginia Laham told the Herald. “Some days later you’ll see another one that will have the different candidates coming on screen and forming Unidad Popular’s logo.”

‘We need the left’

The Workers’ Leftist Front (FIT) coalition will shoot for a humour-driven campaign. Activist filmmaking group El Ojo Obrero created eight spots of 36 seconds each that will addresses different everyday situations of workers such as inflation and future retirees’ pensions, each one ending with the message: “We need the Left in Congress.”

The coalition decided to design the ads in-house rather than hire a public relations company, explained City senatorial candidate Marcelo Ramal. Some of them can already be seen online.

Finally, eccentric Peronist leader Alberto Rodríguez Saá, who leads the Federal Commitment ticket for Buenos Aires City, will present a campaign that may be cheap but will surely get people talking.

Two 24-second ads will begin to air on TV. The first one is a tango-themed piece that asks: “cast your vote for El Alberto,” in almost a hypnotic tone. The latter enters partisan territory —it even dares to change the lyrics from the now-classic Peronist march. Instead of “Perón, Perón…” the voter will hear “Rodríguez Saá, Rodríguez Saá…”