The D-Day for media conglomerates is getting closer; Sabatella faces key decision 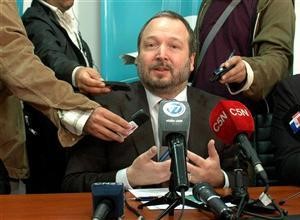 It is getting closer to D-Day for media conglomerates. As a total of 11 adjustments are at the AFSCA media watchdog headquarters on Suipacha street, some of the country’s largest media conglomerates are waiting for a final ruling on whether their proposals comply with the anti-trust regulation passed into law in 2009. They include the key presentations by media giant Clarín Group and major broadcasting television company Telefe.

Little wonder then that on January 8, the head of the Federal Authority of Audiovisual Communication Services (AFSCA) Martín Sabbatella said 2014 will be the year of “the adjustment … to the Broadcasting Media Law.”

Once again, though, AFSCA finds itself at a crossroads. A rigorous, even-handed application of the law could open new confrontations with pro-Kirchnerite media groups (and even trigger diplomatic disputes) — but giving them a free pass on obvious violations would not only discredit Sabbatella’s term at the agency but also the overall, costly experience of the Media Law which was finally deemed constitutional by the Supreme Court in late October, 2013.

On Monday, the Herald published an interview with Sabbatella in which the AFSCA representative gave a first hint as to the agency’s reaction to Clarín’s plan to divide itself into six companies, as presented in November.

“On the face of it, what (the group) has submitted meets the requirements of the law,” Sabbatella said. “Any anti-trust regulation allows these kinds of divisions — so that a single company cannot build up a cost structure which could end up in unlawful practices.”

Over the following two days, the head of the media watchdog was unexpectedly propelled into a media frenzy in which he made clear that the AFSCA’s decision on the conglomerate’s divestment plan will be conditional on adjusting its cable-channel grid — a long battle which began after a 2010 resolution in which the agency ordered cable firms (including the dominant, Clarín-owned Cablevisión company) to stop keeping new channels off their services.

The Clarín Group, which has been legally challenging the measure for years, finally vowed to adjust the channel grid of its digital service by the end of the month, while promising its analog services will also be modified before February 15.

At a presentation dated January 17, Cablevisión vowed to include Telesur, Paka Paka and INCAA TV as mandated by the media watchdog.

Moreover, on Thursday the conglomerate announced that — starting tomorrow — the Clarín-owned news channel Todo Noticias (TN) would relocate away from its place of privilege between rating leaders Telefe and Channel 13, leaving the much-coveted Channel 11 of Cablevisión’s grid to state-owned TV Pública.

But Clarín may be testing Sabbatella’s patience by “reserving the right” not to include news channels CN23 and 360TV on its analog service on the grounds that incorporating these channels would involve ending current contracts with other TV stations. (Córdoba-based newschannel CBA24N, the TV station that revealed the drug-trafficking scandal in that province ruled by José Manuel de la Sota, was also left out in the cold.)

With the Clarín plan moving forward, the main issue at stake once the AFSCA Board of Directors meets again in February will be whether to accept the offer submitted by broadcast TV channel Telefe.

“Telefe has presented a proposal in which it acknowledges it is exceeding the 35-percent limit of market share set by law,” Sabbatella told the Herald.

Regarding the other two issues at stake — the prohibition of a majority stake of foreign capital and its incompatibility with public service, because of its ties to Spanish telecommunications giant Telefónica — Telefe put forward “its own contention about why the company is not breaking the law,” but AFSCA “has not taken a position on that yet,” the Kirchnerite official added.

In fact, although the Herald learned that AFSCA has deemed that there is a clear incompatibility between the arguments espoused by Telefónica and the Media Law — and that such claims were made known to the Spanish company — a final decision on this issue is still pending.

This case goes beyond the current regulation over the Argentine broadcasting market. Telefónica is a strategic player in the bilateral relationship between Buenos Aires and Madrid, thus a political solution agreed upon by the two should not be discarded. However, if the media watchdog allows Telefónica to keep Telefe and the other channels, the government’s position toward Clarín would eventually become weaker.

Another nine plans have yet to be discussed, including by cable giant Telecentro (which is currently using a single licence to cover several districts, thus violating the law), Spanish group Prisa (the owner of Radio Continental and several radio stations throughout the country) and cable company Supercanal, which holds a dominant position in several provinces. The government has a majority on AFSCA’s board of directors.