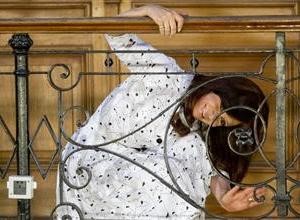 President Cristina Fernández de Kirchner was back on the scene yesterday afternoon, leading a rally at Government House where she announced a public subsidy programme to help youth finish their studies.

After being out of the spotlight for 34 days, the head of state took aim at opposition leaders, whom she accused of trying “to punish society” and compared them to the leaders of the Junta that led the 1976-1983 military dictatorship.

“They already tried to do it once — not only to scare political leaders of the time, but society itself, to prevent them from getting involved in political projects of change,” Fernández de Kirchner told some 200 staunch supporters in the Women’s Room of the Pink House.

She announced a new subsidy programme to benefit 18-24-year-olds — but her comeback itself was the key issue of her speech.

“I hope nobody criticizes this nationally televised address after demanding my presence so much,” Fernández de Kirchner said. “I was seeing polls some time ago that said people didn’t want to see me and now they’re the opposite, they want me to talk.”

Taking fire at opposition leaders and anti-government media outlets, CFK said she was perfectly fine after the surgery she underwent in October.

“They wanted Argentines to believe that I couldn’t go on,” Fernández de Kirchner would later tell her supporters. “I’ve actually had some difficulties — but I’d love to see (how they’d manage) in my place, ruling 40 million Argentines.”

In that regard, the head of state insisted that by criticizing the government, the opposition was actually trying to undermine the new set of rights granted by the national government

Those rights, the President said, “empower civil society” and are “no longer attached to this government.”

It was the second time Cristina Fernández de Kirchner reappeared — a term she said yesterday she was not fond of as it reminded her of forced disappearances — in public after she underwent a delicate surgery to remove a blood clot between her brain and skull on October 5.

Kirchnerite supporters that crowded the small room with pictures of Eva Perón and Mercedes Sosa were ecstatic with the president’s return and their shouts of supports were mixed in with chants.

At the beginning, while the official announcer was presenting the Progresar programme, Fernández de Kirchner watched the promotional video in silence, while she drank from a glass of water. She was flanked by Cabinet Chief Jorge Capitanich and Economy Minister Axel Kicillof, the stars of her last Cabinet reshuffle.

After the video, and right before the initial applause died down, a man in the crowd shouted: “We were expecting you, queen!”

At 5.40pm, more than an hour before the event even started, the room was already packed with people. The Women’s Room (located on the first floor) is not precisely the Pink House’s largest.

Among those invited were a select group of religious leaders, union heads such as pro-government CTA leader Hugo Yasky — mentioned by the president during her speech — and the head of the Grandmothers of Plaza de Mayo Estela de Carlotto, who arrived in a flowered dress.

Some of the first to arrive were sports journalist Alejandro Apo and Victory Front (FpV) City lawmaker Juan Carlos Dante “Canca” Gullo, both of whom were fighting elbow to elbow with journalists and other figures to enter the room. Security guards were unimpressed when they tried to identify themselves, but they finally managed to get through the big glass doors, while a small crowd was left outside — the privilege of belonging.

The front rows were reserved to secretaries and political figures — from AFSCA media watchdog head Martín Sabbatella to Security Secretary Sergio Berni, who sat next to Gullo — but activists crowded the back of the room. The camera crew set against the wall was outraged. “We cannot broadcast like this!”

“Like (Diego) Maradona said / let the ‘gorilas’ (dissidents) suck it,” a group of members from youth group La Cámpora chanted — a line aimed at anti-Peronists, who are known among Kirchnerite supporters as “gorillas.” Meanwhile, a teenage Kirchnerite supporter sitting in the last row was breastfeeding her baby.

Another group of supporters occupied a courtyard in the ground floor. After delivering her speech, CFK greeted them from a balcony and addressed them in an improvised speech — imitating a strategy she had used in her previous reappearance last year.

There, her words were more relaxed and she confirmed she would be travelling to Cuba for a summit of the Economic Commission for Latin America and the Caribbean (ECLAC) on January 28 and to Venezuela for a meeting of the Mercosur bloc on January 31.

Her Cabinet chief has said she will travel to Cuba for a summit of the Community of Latin American and Caribbean States on Jan. 28 and to Venezuela for a meeting of the Mercosur trade bloc on Jan. 31.

The crowd was sweating under the day’s heat but their enthusiasm did not wane as flags of the Peronist Youth (JP in Spanish) and umbrellas with the logo of the CGT umbrella union could be seen in the crowd.